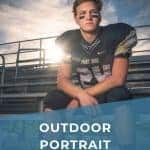 I love shooting outdoors. There is almost an infinite number of possibilities and space to do just about anything you can dream up.

But there are some things about shooting outdoor portrait photography that can be challenging.

However, when you find the right location and get good light, the results can be spectacular!

So here are some tips to help you take your outdoor portrait photography to the next level.

Golden hour is what photographers call the hour or so after sunrise and before sunset.

In reality, it can often be more than an hour. If I am shooting outdoor portraits with clients in the evening, I’ll have them show up about 1.5 to 2 hours before sunset.

The reason that golden hour is ideal is that the sun is much lower in the sky.

Without getting too “science-y” that means that the light from the sun is passing through a lot more atmosphere before it gets to you which acts as sort of a diffuser (like the ones you would put on a flash). That also tends to cause a pleasant looking golden light (hence Golden Hour) that make sit easy to create warm inviting looking images.

When the sun is right above your subject, like at noon. Then it is a very harsh light source and casts dark shadows on the face. You’ll have very bright highlights and very dark shadows. It’s a look that is unflattering and tends to look more like a snapshot rather than a carefully planned portrait.

Just about every outdoor photographer will tell you to look for the open shade.

But what does that really mean and why is it so important?

Open shade basically means an area that is in the shade from direct sun but isn’t completely closed off from the outdoor light. A great example of this would be under an awning that is opened on three sides or even in a garage with the door opened (some people even call this “garage lighting”).

The benefit of open shade is that you are avoiding the harshness of the direct sunlight but getting the benefit of all the light reflecting off of thing various things around you. This creates a very soft, flattering light on your subject that will minimize shadows and soften any wrinkles.

Very often, this may be where you stop.

The quality of light from open shade is great and it’s easy to move your subject around and vary their posing without ever having to worry about the direction of the light. It gives you a lot of freedom.

I often use open shade when I am shooting athletes doing something athletic. The reflection of light coming from all around them means that they can be dynamic in their movement and as long as I can follow them with the camera, they will be lit well.

The downside to open shade is that it can often be too soft. That can mean a lack of contrast in the subject. No shadow means less definition in the features but taking that too far means a dull image without any depth.

If you want to prevent that flat look from happening, then this next section will tell you how to add light to give your image more detail.

Add Light With A Reflector Or Flash

By adding light that you control, you can bring back some of that contrast and detail, but keep it under control.

Start off with a reflector. Use the white side and position it so that it reflects light onto the face of your subject. Sometimes this is all you need to add that little pop of light to their face to make sure you avoid that muddy flat look.

But if that isn’t enough then using flash is the solution.

If youre not experienced with flash, you may be thinking, why do I need flash outside in the daytime?

In fact, the vast majority of my portrait client shoots are outdoors and I always have my flash gear with me. By the way, if you are interested in building your flash kit, check out this guide to recommended flash gear.

So now that we have covered a few things you can do to get your exposure looking good and balanced for outdoor portraits, let’s talk about composition.

My favorite part about outdoor portraits is being able to use the setting we’re in to create compositions that would be impossible within the studio.

Look for objects that you can place in the foreground in front of your subject.

Some great examples of foreground objects include bushes, long grass, sand dunes, rocks, and even man made objects like a lightpost or even a mailbox.

First, they give the viewer a sense of depth in the image. By putting an object closer to the camera (often out of focus), it shows a three dimensional space. Not only does this show the depth of the environment, but it also plays a little trick on the eye and even makes the subject themselves more three dimensional. It’s kind of like a cue to the viewer’s brain that this is more than just a flat scene.

Second, foreground elements also set the scene. If you’re shooting outside, then you probably have chosen the location for a reason. So don’t ignore it…use it. Find foreground elements in your scene and make them part of the image. It helps to place the subject in the location and gives any image that extra touch that is the indicator of a carefully crafted portrait rather than a snapshot.

Shoot A Landscape Photo That Happens To Have People In It

I shoot primarily portraits when it comes to my professional work, but I love to take landscapes on my free time as well. So many of my portrait images end up being a hybrid between the two.

You may hear this referred to as an “enviornmental portrait.”

That simply means that you are taking a portriat of a person, but showing them in an enviornment. This often entails using a wider angle lens than you normally would for a portrait.

To pull this off though, you need to start with a well composed image of the enviornment and then find a place where your subject will look good.