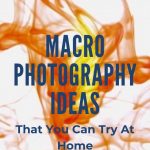 Sheltering in place may seem stifling, but staying at home doesn’t mean you can’t be hitting the shutter as much as you’d like, especially if you own a macro lens.

The following list and accompanying photos were completed shortly before this was written and all the shoots were kept simple and done in a timely manner. The materials used were those which were on hand and easily available.

Each idea was fun and posed a different challenge. There also seems to be a lot of untapped potential with some of these projects if you enjoy experimentation. With more time committed and a bit of practice, you’ll surely be able to get the look you’re after. Hopefully my experiences with these projects will help you along.

Head Into the Yard

If you have access to a yard or garden, grab your camera and head outside. Even a simple yard or a neighborhood walk can provide endless opportunities for a sharp eye with a macro lens.

This was written in May, so there was plenty in bloom and lots of new growth.

While the day I chose for this idea was pleasant, it was breezy and that made shooting any blooming flowers difficult.

What eventually caught my eye was a patch of sprouting moss on the edge of a grassy area. Low to the ground, it was out of the wind, but it also meant getting a bit damp and muddy if I wanted to get close. I’d never seen moss from this perspective before and I liked it, it’s a certainty I’ll revisit this area to see if I can improve.

It was sunny, so I took advantage of that and closed the aperture more so there’d be more depth of field. Depth of field is probably the biggest challenge with macro photography and the tinier you get the harder it is, and I’d say the moss had moved into that area. It was a challenge, but a worthy one.

A vase of bargain bucket cut flowers near the kitchen sink caught my eye when the late afternoon sunlight created a dramatic look. Because of the lighting and the smaller aperture associated with macro, the dishrack background was conveniently hidden in darkness.

This was a relatively easy one, but since it was sunlight I was working with limited time. I rotated the vase and played with focusing on different areas and angles of view. If you don’t have any cut flowers available, house plants may also prove interesting subjects. I like cut flowers with macro photography because of the variety of flowers, vases and backgrounds available.

It seems everyone collects something, and many have more than one. These items can provide opportunities to both document them with your camera and highlight interesting aspects and easily overlooked details.

I was allowed to photograph some selections from a coin collection. I loved the details and polished surfaces of proof quality coins. There wasn’t much difficulty here and minor changes in position could greatly change the effects of the lighting and resulting photos.

Some of the modern commemorative coins had beautifully detailed images and older ones provided eye-catching styles that were highlighted with the macro lens. Collections are as varied as their owners and I wouldn’t hesitate to do more collection photography. Collectors are always eager to talk about their gathered treasures. They like to share the history behind them and stories of how each piece was acquired. Every time someone has shown me their collection I’ve learned something, it’s fun to combine that with photography.

Jewelry, no matter what the value, can be very photogenic. With a clean background and good lighting, even a strand of inexpensive mismatched beads can be an engaging subject.

Glare and shadows, along with positioning the strand were the challenges with this project. Indirect sunlight, an overhead light and two small flashlights placed on opposite sides gave me plenty to work with as I tried several arrangements. Focusing was fairly easy because the beads were on the same level.

I suppose it could be argued my photo of Dash from The Incredibles isn’t technically a diorama, but it does fulfill most of the definition. It also successfully captures the spirit of diorama photography and helps show some of the potential of working with miniature scenes.

With the small toy posed in a position of action, it immediately came to mind to work with that aspect of the figure. This project involved a lot of experimentation with shutter speeds, which means I was also adjusting my aperture and ISO settings with each change.

After dialing in the shutter speed, working on my timing and steadiness while panning the camera were the big challenges. I wanted the final photo to look as though Dash was streaking along at high speed, so I had to keep the camera as level as I could while moving it. I finally achieved the desired effect, but it looked washed out.

I tried again in a different location, away from the indirect light of a window. A speedlight was also added into the mix. After another period of trial and error I was finally starting to see Dash as I’d imagined. I kept shooting, but realized I was getting too much of a good thing. I not only had to blur Dash level and at the right speed, but the camera also had to stop in the right place. When the motion blur was too long it looked odd that his arm hadn’t moved, but when it was shorter it gave a more believable image.

This was one of the harder entries on this list, but it was fun and there’s endless possibilities with the array of action figures and models available.

Patterns are everywhere and it won’t take long to find a target for your macro lens once you begin looking for them in this way. This was probably the easiest and shortest of the chosen projects.

I ended up choosing decorative wicker pads in my kitchen and some lively embroidery on a purse. Both contained colorful patterns and they were only the first objects spotted. Every room in your home is probably full of patterns created by different surfaces or colors. You could likely keep yourself busy photographing patterns in your home for some time.

If you have a feathered, furry, or even finned companion sharing your home, turn your macro lens their way.

A few differently colored parakeets shed a nice variety of attractive feathers as they molted for the spring. The hardest part of shooting them was the arrangement. They not only easily snagged on fingers, but being so light meant the area needed to be free from drafts and sudden movements.

With a macro lens that’s a longer focal length you might be able capture the beauty of your pet’s eyes. It all depends on what you have. Many pets also provide patterns in their fur, feathers, or scales. Fish add the extra challenge of constant movement. If you have something small, like a hamster, combining this project with dioramas could also be a lot of fun.

Drops of food coloring descending through water can create deeply colorful abstracts with a flowing beauty. But this one was harder than expected. I got lucky by having a tall, cylindrical flower vase made of clear glass. After filling it with water and placing it near a window, I used a white plastic cake tray for a clean background.

As soon as the drop of coloring hits the water it’s a non-stop and constantly changing scene. I liked the speed this project required, but focusing through water proved difficult. You’ll have to manually focus and you’ll also want to have as much depth of field as possible because there will be a lot of blurred areas.

Most of this shoot didn’t turn out well, but it was so spontaneous it’s something worth doing again and the set up was pretty easy. I was typically able to put a few drops in each vase full of water a few times before it became too murky.

Blending drops was interesting because it added another dimension when the new colors were created. Descending trails of yellow and blue would suddenly transform into a rich green, yellow and red would become a vibrant orange, and a mix of red and blue would reveal a deep purple.

This project’s demands were similar to the food coloring project. I used a clear, flat bottomed glass bowl placed on top of brightly patterned fabric. The idea is that you can capture the refracted pattern against a blurred background of the same colors.

The first issue was that the small drops of oil would soon expand to the point where the effect was lost. This can be corrected to some extent by using cold water and adding a small amount of dish soap. You don’t want soap suds (although I discovered that could be another interesting subject) and it only takes a small amount to help keep the oil pooled in tight circles.

The drifting nature of the oil wasn’t all that problematic because it moved slowly, but even when focused on the refracted image there was often an unappealing blur. There are a lot of variables with this including the bowl, the amount of water, the type of oil and the lighting.

I’d like to return to this idea as well, because I’d like to get better with it and also see what combining it with food coloring or different liquids could create.

This list of 10 macro photo ideas for while you’re home is by no means comprehensive and there easily could’ve been more. This is really more of jumping off point because there are endless ways to vary and combine ideas.

I shot each idea with minimum set-up and kept it all as simple and short as possible. While these aren’t flawless, I was having enough success to make me want to keep going. Other than my camera and macro lens, the only other gear used was a speedlight and that was just for the action figure.

You don’t need elaborate set-ups to have fun with your camera. But if you take an idea, work with it and add a bit of creativity, you’ll be happily surprised with what you can create with a macro lens.

Additionally, If you have a place where you can go for a walk there will be even more chances to put it to use. I took a neighborhood walk the other day and came home with several shots of various tree blossoms. And before I even got to the first tree I realized I’d also be having a spontaneous photoshoot with a neighbor’s dog as I passed his fence.

So while this doesn’t count as a macro photography idea, this was a cool looking dog, so he counts for that 1/2 you were wondering about in the title.

The macro works wonderfully for portraiture and when combined with the fact that he’s a really handsome dog these shots ended up being my favorites of the day.

Being at home doesn’t mean you can’t use your camera. On the contrary, being at home is one of the best places to be creative with your camera. Whatever it is you decide to shoot, enjoy it and be willing to play around with things, that’s part of the fun of photography. 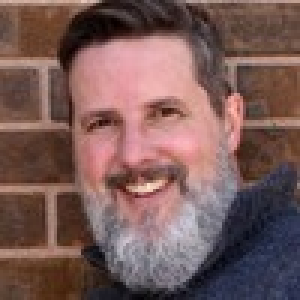